If you’re here, you’re probably interested in who I am, where I’m from, what I’m like, how I got here and what type of dog I have. I’ll do my best to give you the low-down on the Pedro (as I’ve been named by my in-laws since my father-in-law is named Peter as well). 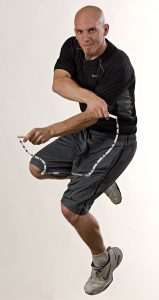 I was born in Ketchikan, Alaska and moved to Juneau when I was five (there aren’t a ton of memories about the first 5 years other than that I loved bright green and had a cool green suit that I used to wear to church). If you’ve never visited Alaska, it rains a lot (at least in Southeast AK). This leads to a thick skin when it comes to rain and lots of indoor activities. In second grade I witnessed a jump rope assembly at my elementary school and I was hooked. I started jumping that very day and was probably one of the worst candidates for the professional jumping school. I stunk. I was determined to learn though so I spent that entire year practicing so I could make it on the GV Jumpers (Glacier Valley Elementary). Third grade came around and I made it on the team, they changed the name to the Juneau Jumpers and I spent 9 years practicing, performing, competing and traveling around the world. During our years of competition, my team won 7 World Championships along with numerous local, state and national tournaments. We had a rockin’ awesome team and I couldn’t have had a better group to spend those years with.

During this whole period I dealt with numerous character issues. I was extremely shy (a fact that most people find hard to believe considering that I talk to people for a living) and spent most of my time hiding who I was and what I felt from everybody. For some reason it was determined that I would be the one that everyone would pick on. I ended up with a very strong dislike of who I was and really didn’t think that I was good for anything. This lead to many years that I wished I didn’t exist and was in deep need of a way out.

About the time I got out of middle school, my mother decided that I had to join a youth group at a church. Which one didn’t matter, just that I joined one. My brother was attending one and since I knew 2 people there, it was the smallest ‘evil’ of all the options available. A new youth pastor started right when I began going and he took a strong interest in helping me out of my shell. He gave me responsibilities and plenty of talks that eventually led to me getting saved. I was always one who seriously considered everything I did. I wasn’t one of those instantly saved types that can give you a time and date, it just happened over a 6 month period that God worked through him and others to lead me to understand God’s love and plan for my life.

The next few years in high school were a growing time for me. I was traveling a lot with jump rope, playing soccer and starting to walk the path of a believer. There were many things that I had to deal with, but God was always there, leading me through them and helping me to step out of the shell that I had created to protect me. I do want to be honest, I hated high school. I disliked it so much that I got out a year early (I took extra courses over the summer so I could do so). It was a growth period, but one that I was ready to get out of. I decided that the college route wasn’t for me and I wanted my own business.

I moved to Chicago and worked for an established professional there for 6 months. After finishing up, I moved to Florida and started my own business, Rope Masters. I’m always asked, why is there an ‘s’. The reason is that my best friend and I started it together and we wanted it to be open enough to offer other jumpers an opportunity at some point in the future. After the first semester in Florida, he went on a 2 year mission because he is Mormon, which was actually a very good thing in developing a solid understanding of what I believe and why. Mormons are taught how to talk with people about what they believe and you can’t fuddle your way through a conversation with one if you want more than a one sided talk. It really forced me into studying scripture and laying a deeper foundation of biblical teaching that I’ve built the rest of my life on. It’s amazing how God can use any situation to help you grow if you’re open to it.

I spent 4 years working room service and waiting tables at a hotel while trying to get my business off the ground. I started attending a church that had a very strong children and youth ministry and I learned a lot from being there 3-5 days a week. God opened up numerous opportunities for me and I found that my jump rope programs could be used for a lot more than just entertainment. Little did I know that he had been prepping me for a unique ministry. One day while I was talking about my show, the Children’s pastor invited me to perform at the summer camp he was about to put on. I was free and decided to do it. The show went great and I was blown away by the response that followed a simple salvation call after my program. A lot of kids got saved. The pastor and I talked about it for quite a while after and it really started to click that this was what God wanted for me.

The next few years had me start performing and speaking at churches around the country. In 2002 I ended up getting sick of Florida so I moved to Oklahoma to base my ministry out of Church on the Move. I had performed there a couple times, but after much prayer had decided that this is where God wanted me. I’ve been an active member of the church since the day I set foot in it. I’ve learned a boatload of effective ministry techniques from the awesome staff that has been there over the years. Which leads me to today. 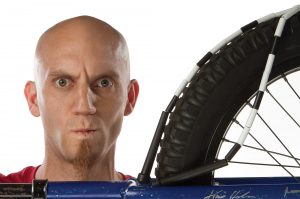 I’ve been doing jump rope shows for a living since I moved to Tulsa (2002). It’s been amazing to see how God has used this gift to reach people around the world. I got married in 2007 and immediately went on a 3 year intense school tour (about 350 schools per year) where I would go in and encourage students to become a champion in life by working hard and studying. Obviously I am not allowed to minister directly in schools, but God has still used this to encourage students around the country. I have performed at numerous Upward events as well as regular weekend services for lots of churches, big (Church on the Move, Prestonwood Baptist in Plano, Christ Fellowship in Palm Beach Gardens and Lakewood Church in Houston) and small (attendance of under 50). I love the opportunities that God has given me and I look forward to what he’s going to do in the years to come.

I started breaking Guinness World Records in 2013. I decided to give myself some challenges and it turns out I’m pretty good at breaking records! I’ve broken 12 officially and a few more unofficially. I’ve still got a few more that I’m currently training toward, but I’ve been quite happy with what I’ve been able to accomplish. For more information check out the page I have dedicated toward my records.

I’ve had the opportunity to perform all over the world in countries such as: Australia, British Virgin Islands, Cambodia, Canada, China, Denmark, Egypt, France, Germany, Italy, Jordan, Kenya, Malaysia, Mexico, New Zealand, Nigeria, Palau, Peru, South Korea, Sweden, Tanzania, Thailand, Turkey and Vietnam. I’ve also performed in all 50 states in the U.S. as well as special performances at such venues as: Tivoli Gardens in Denmark, Sea World, Disney Land, Disney World and a Seattle Supersonics vs. Boston Celtics halftime show. A couple years ago I was hired to double Adam Sandler in the movie Jack & Jill which came out in 2011. The Double Dutch scene on the cruise ship makes it look like he knows how to jump…but it was actually me.

Quick random info: I got married 01-05-07 to Alicia. My dog was a Giant Schnoodle named Wookiee (unfortunately, she just passed away from an unfortunate accident at the age of 7 and we’re still quite bummed about that). I love smoothies and bread (good thing I jump rope for a living so I can stay thin). My wife and I sold our house in 2016 and bought a truck, camper and trailer. We live on the road full time and I just hop on a plane wherever we happen to be to make it wherever I need to go.

I would highly recommend Peter Nestler for any type of Children's program. He was entertaining for all ages. I heard adults as well as young children laughing and clapping and having a good time. His message was clear and right on point for what we were trying to talk about for our season. Everything he did was great. I would highly recommend him!